SmarTravel at the Aronoff Center During Wicked 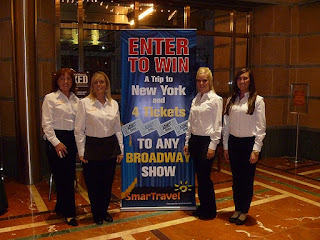 For two weeks beginning on Wednesday, November 2, 2001 through Wednesday, November16, 2011, SmarTravel will be at the Aronoff Center!  This timeframe coincides with the first two weeks of the Broadway in Cincinnati run of "Wicked."  Winner of 35 major awards, including a Grammy and three Tony Awards, "Wicked" is Broadway's biggest blockbuster, a cultural phenomenon, and was just named, "the defining musical of the decade" by The New York Times.

While at the Aronoff Center, SmarTravel staff will be welcoming entries for a trip to New York and 4 Tickets to any Broadway show!